情 事 故
At work today, John Hathaway and I were reading about Border Collies during a lull in store traffic. We stumbled upon a website that described "border collie escape tactics". Coincidentally, hours later, we arrived at the apartment after work only to find Zeah missing in action. In the time I was at work, 11am-7pm, Zeah had smashed her way out of the living room window. 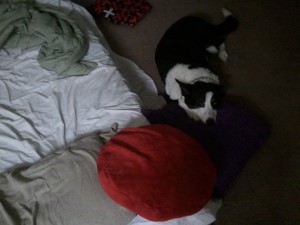 Something I should say about Zeah, she's deathly afraid of storms and, yeah, it stormed today. It's also not the first time she's gotten "lost". As usual, somebody saw her wandering around. She's beautiful, so she always gets spoiled by strangers. The end of the story is that one of my neighbors harbored her. It was somebody upstairs, John & I heard a man open a door and tell Zeah to go outside. She came prancing down the steps as if nothing happened. Apparently he didn't want a confrontation because all the doors upstairs were closed when I went to investigate. So, to the shy neighbor above me: Thanks for saving me hours of walking around, posting signs, and calling animal shelters. :)
To answer the question asked in this post's title, Zeah's middle name is "Houdina".